Inspiration Found in a Peaceful yet Eerie Cemetary 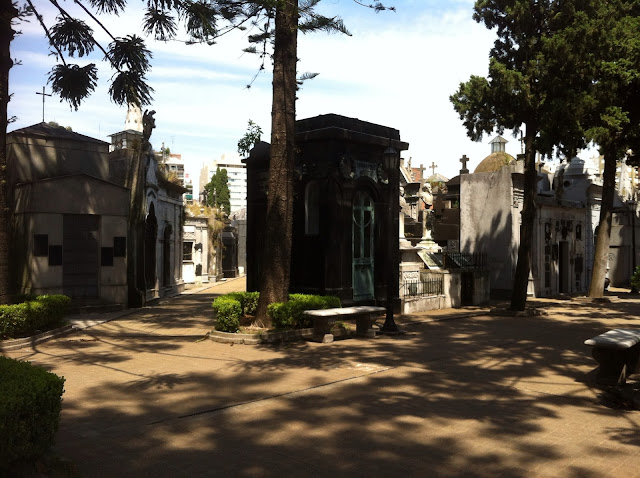 Our trip to Argentina would not be complete without getting wrapped up in the legend of Eva Peron (Evita), the first female President of Argentina, a woman known as much for her style and grace as her fierce political passions and dedication to social issues. There is no better place to start than her resting place, which we visited on a beautiful Buenos Aires day (extremely sunny and intensely humid). 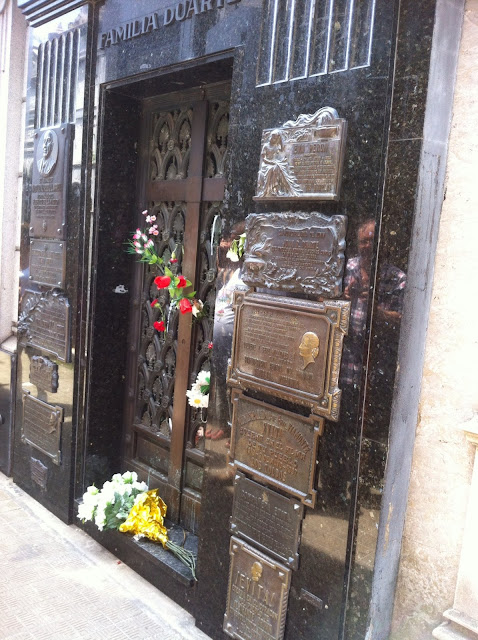 Accompanied by a message from her followers, Peron’s dates of birth and death rest on a plaque accompanied by a carving of a little girl. This plaque, however, does not rest on a simple grave. It is on a marble wall and, Peron’s resting place is anything but regular. Her plaque and others surround a grand doorway, the gateway to the final quarters of the Familia Duarte. It is a large grand mausoleum, almost as big as a small house, which befits Peron’s place in Argentinian society. You are not surprised that a woman given the title of “Spiritual Leader of the Nation,” would be buried in such a beautiful and inspiring structure. 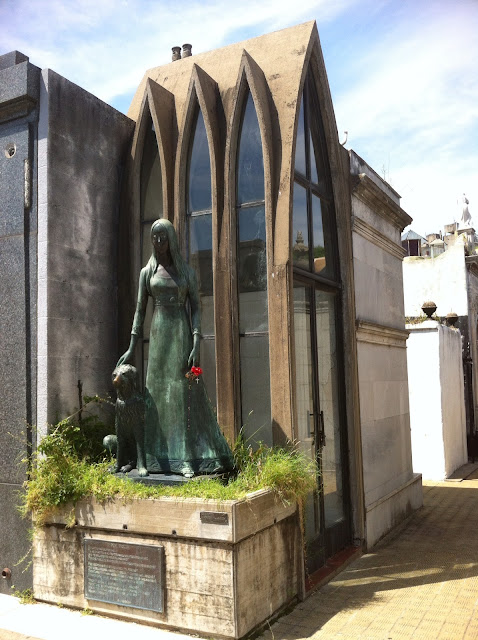 There are others, equally and sometimes even more grand. All lined up next to each other, these large pieces of art made us feel like we were in a small city, with its own orderly streets – but we were in a cemetery. Located in the northern part of Buenos Aires, La Recolata feels more like a peaceful park or outdoor museum than a cemetery which has many famous Argentinian politicians, military generals, scientists and poets as its residents. Opened in 1822, the cemetery is the oldest in the city and is named after the now affluent neighborhood which was founded by an order of monks named the “recoletos.” 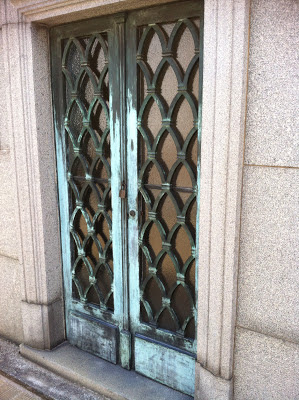 We spent what seemed like the entire afternoon exploring every part of the cemetery. As lovers of beautiful things, we couldn't help but stop at every tomb, examine and be inspired by every intricate detail both outside and in. The mausoleums are works of art and some have been declared historic sites by Argentina. While the layout of the structures is orderly, the style of each building is anything but. Depending on when they were built, we saw mausoleums that were Neo Gothic, Art Noveau and Art Deco. Most of the structures have glass windows on the front, giving you a glimpse of the inside where along with altars or vases of flowers, we sometimes saw beautiful stained glass windows. 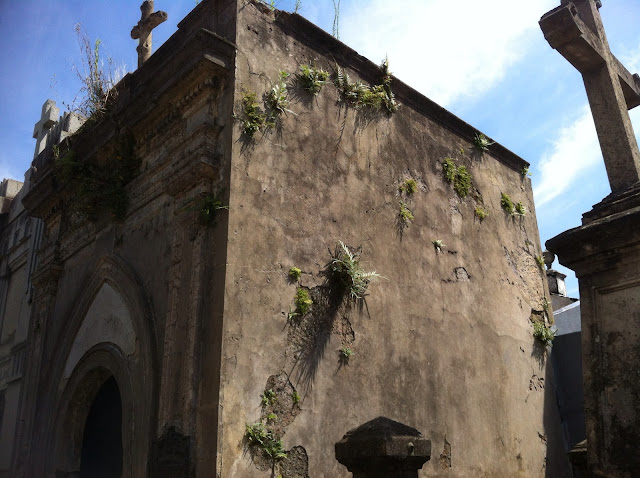 Most of the mausoleums are well maintained, but once in a while we would encounter some that were decayed or vandalized  Something about these decayed ones gave me the most inspiration- whether it was wondering what fate befell the family that they could no longer take care of the beautiful building or just the simple, elegant beauty of a renegade tree branch or vine creeping its way through the broken stone. Something about witnessing nature trying to creep its way back into this modern man-made concrete jungle gave me a feeling of peace inside, inspired different patterns and colours and made me immediately want to return to my workshop to create. Hopefully we can recreate this inspiration that Recoleta inspires here at home into new creative pieces. One thing this trip has inspired is filling our space with many many more plants! 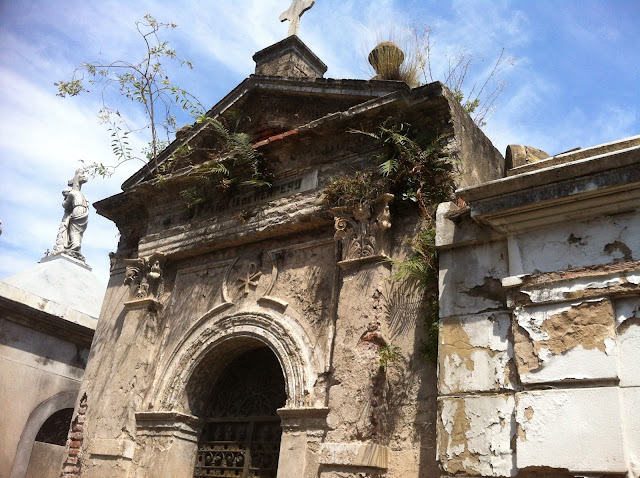 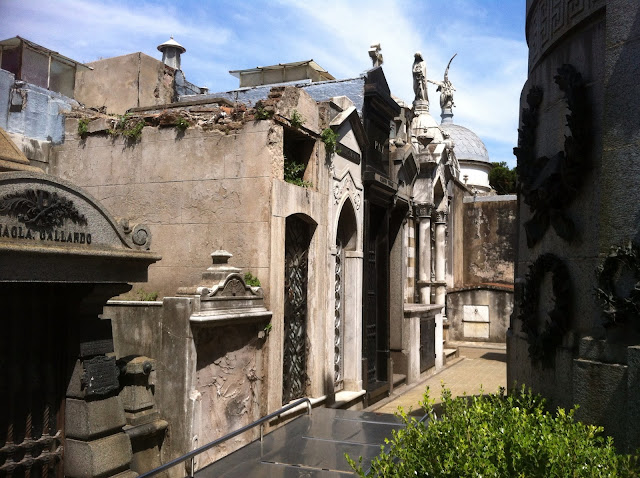 Maria of Mai: an Argentinean perspective on local crafts

Walking down the streets of Palermo Viejo, on our recent trip to Buenos Aires, we came across a store that sells amazing jewellery  We couldn't resist so we walked in. This store, we came to find out, carries works of local designers and that just made us love it even more. A pair of silver earrings with a rose motif caught my eye. It was love at first sight, I just had to have them.

Upon our return to our apartment we researched the contact information of the artist, that the shopkeeper told us about, and I decided to email her and extend my compliments on her beautiful work. Ten minutes later there was and email back from Maria with a lovely invitation to visit her studio. Maria lives in an older but vibrant part of the city where you can get a real taste of Buenos Aires, where real life exists tucked away from the usual touristy attractions.
Her apartment is located on a tree-lined street. From the outside it looked like a regular one story     house, but behind the main entrance there was a long corridor leading to many apartments.


Maria is originally from Mexico. Having spent many summers in Buenos Aires she fell in love with the city and decided to make it her home. She studied industrial design where she designed sculptures, but once she gave jewellery making a try, she was hooked. Jewellery gives her the freedom to showcase her creativity to a wide audience in different locations. In her studio are two cabinets housing her work. One cabinet is dedicated to her experimental works and the other one is the home of ready-to-wear pieces. It was interesting to see how on the surface the two lines seem to be significantly different, but looking closer there are definitely parallels that can be drawn.

Maria draws inspiration from her native Mexico as well as the seemingly unnoticeable details of everyday life.


Our visit to Maria's studio was an unexpected gesture on her part and it illustrates the warmth, spontaneity of the local people and the desire to share their story and hospitality.Maria also runs an Etsy store, so if you would like to see more of her work or request a custom item, you can do so here.
Email ThisBlogThis!Share to TwitterShare to FacebookShare to Pinterest 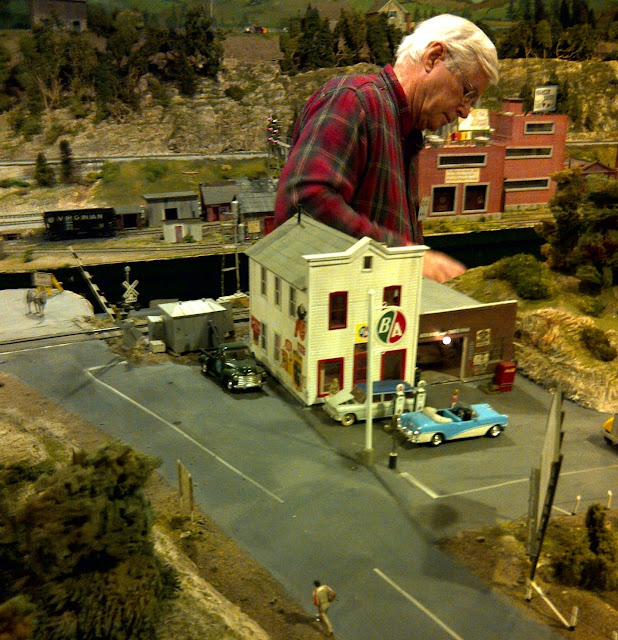 Recently, my brother-in-law and I planned a surprise for my nephew. Not telling him where we were going, we travelled into the busy neighbourhood that is now Liberty Village. We proceeded down an alley behind of one of the few remaining industrial buildings and walked down the stairs leading below a luxury furniture store catering to all the new condo residents in the neighbourhood. Tucked into the basement is the Model Railway Club of Toronto (MRCT). There are few things that can excite a child like a model train set can. There is also a guarantee that the adults are more excited than the child, which we were.
While it is not visible at street level, the club has been a part of this neighbourhood’s history since 1946. Founded in 1938 and originally located in one of the founders’ basement, the club moved to Union Station temporarily and then after World War II, found a more permanent home at 171 East Liberty Street (formerly 37 Hanna Avenue), a former munitions factory. One can only imagine how much change the club members have witnessed in this neighbourhood over sixty years. One of the reasons I wanted to visit was because I had a very vague memory of being taken there by my father – who was a railroad worker – when I was a kid. I remember it being in Liberty Village because we would always park there to visit the CNE since it was almost desolate with its seemingly empty warehouses signalling a Toronto industrial age long gone. 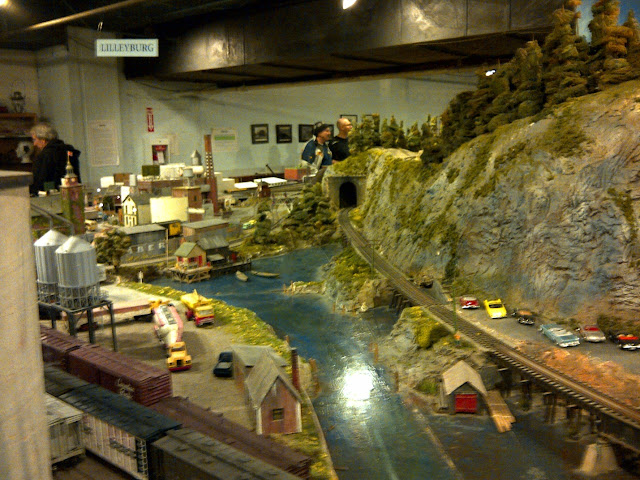 The other reason I wanted to visit was because the MRCT is moving. Before the club members take on the arduous challenge of trying to unpack and recreate their world at 11 Curity Avenue (St. Clair/O’Connor), they are welcoming the public to visit every weekend until the final show on Family Day 2013 (February 18). 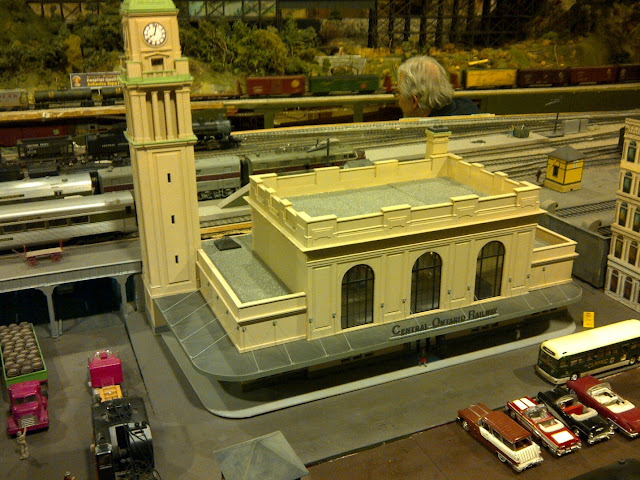 Walking into the club, you feel like you are immediately stepping back in time. Your eyes try and take in everything at once, but you soon realize that you will require more than one lap of the entire layout to truly see all of its unique features. (We did four laps) You also immediately recognize that you are in a world of trains. The club states that a visiting rail marketing executive, who worked in the industry for over 20 years, remarked that it sounded and felt like a real railway. The club members have recreated a loose representation of the original Central Ontario Railway of the 1950s and 1960s, which ran between Picton and Trenton. While the towns in the model are named after club members, they have named passengers cars after towns along the original route and have reflected some of the major industries at that time in their layout – such as mining, farming and lumber. 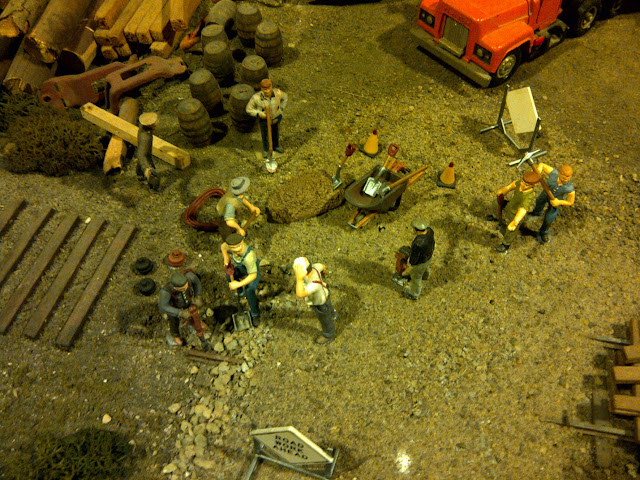 As you walk through the display, you marvel at the handcrafted creations on display, from the buildings, landscaping and individual people that dot the landscape – whether they are waiting for a train, working in a mill, climbing a mountain or walking through a town’s main street. The landscape is large and realistic and there are just enough trains travelling at once that you are always pleasantly surprised when one appears .

Sometimes you can find art and creativity when you least expect and this was certainly one of those times. As you walk through the layout, you immediately respect the artistry, passion and discipline that it took to create and maintain this mini-world over 60 years. And it was all done not for financial gain, but for the love of a simple toy and the pleasure that it brings.

The other notable feature of the layout is its local feel. Obviously, it’s an Ontario landscape, but dotted throughout are signs and advertisements highlighting Canadian industry. Once in a while, a train will roll by with a “Proudly Canadian, Made for the World” label.

The final element of the day that made the trip truly worthwhile was the opportunity to engage with the club members. For many of them, membership at the club has been a lifelong commitment which is reflected in the pride and knowledge they share with visitors. As they speak to each other on walkie talkies and conduct the vast orchestra of dozens of trains operating at once, they are attentive to their guests, asking questions, telling detailed stories or flashing big smiles at the wide-eyed kids. They are truly passionate about their hobby and want you to enjoy their creation as much as they do.

I highly recommend a visit to the club before it moves as it will be the last chance to see the layout before 2015 (that’s how long it will take to meticulously take down and create the display!). All show times are from 11am to 5pm and cost $10 for adults and $6 for children. You can find more information at http://www.modelrailroadclub.com/MRCT/Welcome.html.
- Helder Marcos 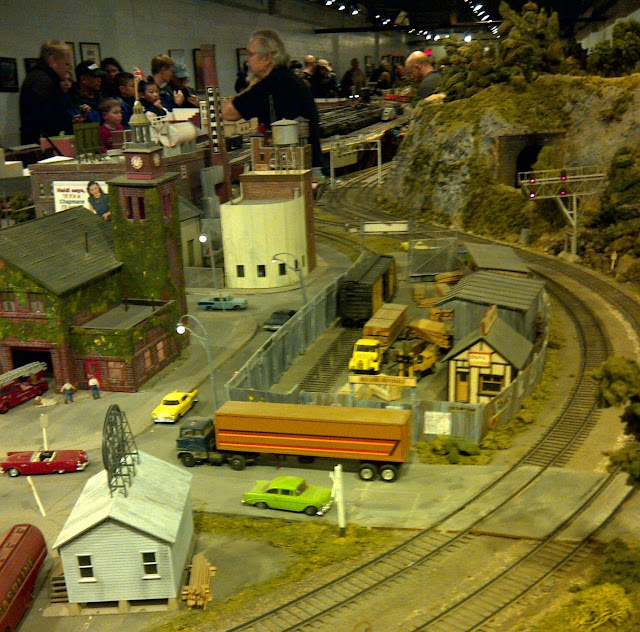